When your state changes you may not be aware of it. After all, the “You” deciding if you’re drunk is drunk! Only your intellect can look at your behavior and conclude you are drunk, but in the brain the intellect is like the nerd in the high school movies that nobody listens to. But when it comes to your state, the intellect is the whistle blower that can warn that all is not well in the Kingdom of You. Whether or not the rest of you listens depends on the balance of power in your brain.

Alcohol is dangerous because as your skills go down, your belief in them goes up

Alcohol is extra dangerous because as your skills go down, your belief in them goes up.

Alcohol is like fatigue on steroids, so if you get drunk, sleep over or take a cab

When drunk, you cant take that corner as well but your emotions tell you you can do it better! It is a fatal combination. Most people “know” alcohol impairs their ability to ride. In this regard alcohol is like fatigue but it also raises your confidence. Alcohol is like fatigue on steroids, so if you get drunk, sleep over or take a cab.

How much is too much?

Most laws find you intoxicated at a Blood Alcohol Concentration of 0.08% to 0.10% and first time penalties range from fines to six months license suspension. Usually two or three drinks has an effect on your driving, and four or five drinks and you’re over the limit. What you drink also matters, as some drinks have more alcohol than others. These numbers are less for a small person or for women. If you wait for an hour, you lose about one drink from your bloodstream. Coffee has no affect at all on your blood alcohol level, nor does drinking water. In general, you can drink less than you think you can, but as you drink you think you can handle more. That’s because you’re drunk!

Fatigue slows down your brain and reduces your awareness of things around you. The human “battery” needs about eight hours of charging to run for only 16 hours! The brain copes with low energy by shutting down what it doesnt consider important. So when tired you get “tunnel vision”, which is like riding with blinkers on. Beware of fatigue, as you need all your brain to ride!

Even if the mind does not want to sleep, eventually the body just turns out the lights

Fatigue, like intoxication, can creep up on you. Hyped with stimulants like coffee or a strong desire, you may not realize how tired you are. The problem may build up over days, as you accumulate a “sleep debt”. Normally, when people tire they stop to rest but some people fight this. Some children get more active as they get tired. At nap time they run around in frantic circles until they finally collapse and fall asleep anywhere. Its a strange thing to watch. If the mind does not want to sleep, eventually the body just turns out the lights. This is exactly what you never want to happen on a motorcycle.

Falling asleep at the handlebars

Falling asleep at the handlebars can happen on long trips 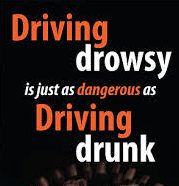 Riding while drowsy is just as dangerous as riding while drunk. A surprising number of people fall asleep at the wheel in cars, usually with bad results. They are not lazy people but more likely the opposite – hard working A types who push their bodies around. One day they push too hard and lose. Falling asleep at the handlebars is unlikely, but on long trips it can happen if you want to press on and dont feel like stopping. You know you are tired, but maybe the weather is bad and if you stop you might not want to start again. Do you listen to your body or deny it? If you go against it, remember that ultimately your body not “you”, controls your “on/off switch”. If the body flicks this switch, then “you” disappear. You decide, but sometimes you really need to take a break.

Just for a second. This is a true story. I was on a two hour trip home after a long day in another city. It was dark and I was tired, and for the last few days had not had much sleep. While riding, my eyelids felt droopy. Then my body presented a “great idea” to my mind: “Why not just close your eyes briefly to rest them, just for a second, then open them again after that?” Fair enough I thought, as I was riding along at high speed. Then another part of me suddenly realized that was a good way to become roadkill. Shocked at my own stupidity, I stopped at a cafe, ordered a coffee, then put my head on the table and promptly fell asleep for 15 minutes, then headed off again. I arrived a little later than planned, but in one piece.

Naps dont waste time, they save it

If you are tired and stop, maximize the power of your break with a nap. Naps dont waste time, they save it, as the first part of sleep gives the most rest. Napping is a skill. The key to effective napping is to rest deeply but briefly. Even a short nap can recharge your body’s batteries. If the weather is fine, I find a clear grassy area, like outside a highway road-stop, and lie flat on my back. You rest best when horizontal. Then I forget the stupid world and “disappear” from it. In bad weather I find an indoor place where they let you sit, like a cafe, order coffee, then sit upright, close my eyes, and drift off. I find it easier to nap sitting upright than slumped. The second part of napping is waking up again. If you sleep for hours then it isnt a nap. I like a place with people moving or talking so I dont nap long.

The Army Nap. The apocryphal army story about how to nap is to get a metal bucket and a spoon. Sit holding the spoon between the palms of your hands over the bucket. Now nap. When you fall asleep your hands relax and the spoon falls into the bucket with a clang that wakes you up. This is the end of the nap. Now you are good to go again. Its just a story, but it illustrates the power of naps.

Give your anger a rest while riding because it is unsafe.

Anger alters your brain to take more risks, so people do things when angry that they would not normally do. Angry time is risk time. And its not just a thought, as specific brain chemicals change how your brain works. If you ride while angry only half your brain is attending the road. The other half is getting upset and concocting elaborate schemes for revenge. If you are angry when you get on a motorcycle, you have to tell that half to “get with the program”, because you need all your brain. Give anger a rest while riding because it is unsafe. If you want, you can get angry again after you arrive.

Warm up your brain

Just as it is a good idea to warm up your motorcycle for a few seconds if it hasn’t been used for a while, so it is a good idea to warm up your brain if you haven’t ridden for a while. So when you start riding, for the first minute or so take it easy. If you have not ridden for a week or more, then take it easy for five minutes. It takes time for the riding brain to kick back in. Your brain is a complex piece of machinery, so give time for the right circuits to activate. At the first intersection, take a second to breathe and focus. If pulling out looks tight, then just wait. Until your mind speed is up, keep your bike speed down.